Real branding from a fictional world

As brands become an ever more prevalent aspect of our cultural landscape, works of present-day fiction demand increasingly well-crafted identities and applications for the imaginary commercial ventures that populate those worlds. Fictional brands are an interest of mine (as comedian George Carlin said, “hobbies cost money; interests are quite free”), and from time to time I’ll be writing here about the most successful and purposeful ones I encounter.

Before we get to the good stuff, I should qualify what I mean by purposeful. Many celebrated fictional brands, despite their cult status, are trivial in context. They serve mostly as directorial signatures (Red Apple Cigarettes) or wink-nudge jokes for the most savvy audiences (Finder-Spyder, Oceanic Airlines). I’m more interested in those that perform important functions in establishing set and setting (Quietus), or more still ones that play central roles in character development or plot (Ablixa).

I recently saw “Jack Ryan: Shadow Recruit”, the latest addition to the Tom Clancy canon. One of the more delightful things about the movie was the range and polish of the applications for Cherevin, a Russian financial firm at the center of a plot to collapse the US dollar, named for its chief, Viktor Cherevin (played with expert menace by Kenneth Branagh).

The Cherevin logo itself, a brooding geometric monogram that looks to be the lovechild of Enron and Omni Consumer Products, is rational and unfeeling, conjuring up Cold War fears of opaque foreign bureaucracy. The wordmark is never shown in its entirety on screen, but I’ve attempted to recreate it based on the portion that is visible and other instances of similar Cyrillic lettering that appear throughout the movie. 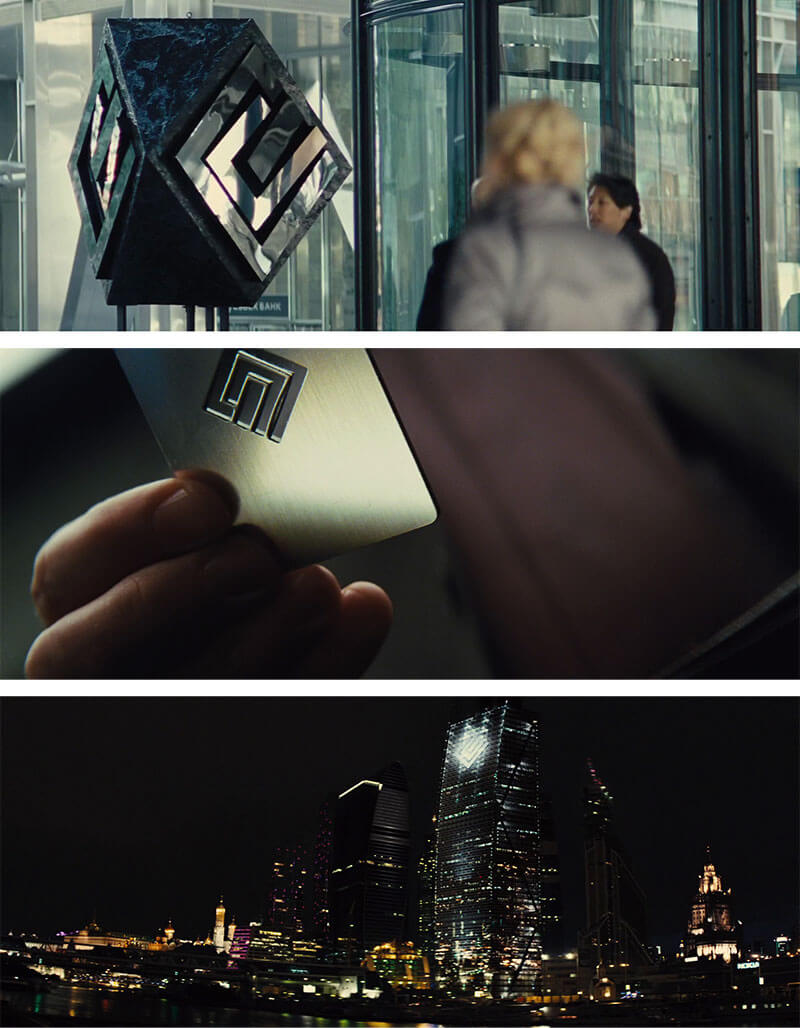 Of course, there is the standard array of logo-on-stuff applications – the side of a building, a lobby sculpture, brushed metal key cards, frosted glass doors, spinning 3D screensavers, you get the idea. Its sturdy diamond construction is easily recognizable even out of focus, so when a file folder is passed around or a uniformed officer runs past, the vague impression of the shape is enough to signal to the audience this document is not trustworthy or the bad guy owns the cops.

This diamond structure – hard edges, perpendicular lines, 45 degree angles – can be seen pervasively throughout the movie’s set and prop design, and it’s in this area that the more inventive interpretations really shine. The logo is repeated and rotated to generate an elegant pattern that adorns office walls and smartphone backgrounds. The UI on a security guard’s computer incorporates a diagonal grid and a bevy of aggressive diamond-shaped icons and cursors. Even Cherevin’s office building has diamond support structures around the exterior. The resulting impression is monolithic, oppressive: Cherevin is everywhere…and it’s ruthlessly on brand. 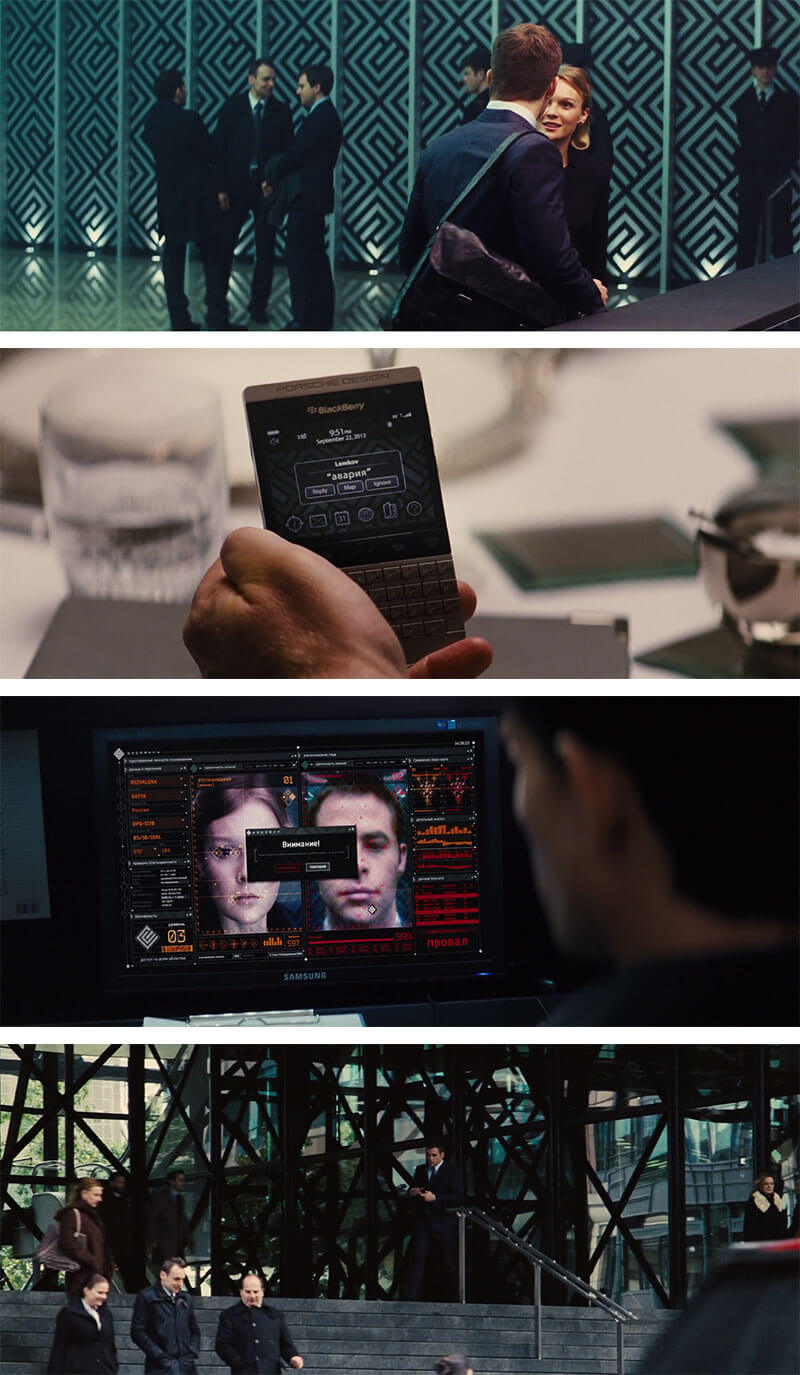 Perhaps the most unique and outlandish implementation comes in the movie’s closing moments during a visualization of a brute-force computer hack. The logo becomes a hollow, deconstructed wireframe that spins about as it slowly fills in and reassembles itself in pixelated chunks, much like watching a hard drive defragment or 3D animation software render an image in buckets. It’s clearly nothing like real hacking, but it’s simple for the viewer to gather what’s happening. Like the other UIs in the movie, it’s in full-on angry computer mode, echoing the personality of Branagh’s antagonist.

Cherevin may be the evil aggressors of economic warfare, but I’d love to have them as a client. They could teach me about propping up housing markets, and I might be able to offer them a nugget or two about reducing security breaches through better interaction design. Plus, I bet it’s fun to get a project brief with the objective of ‘instilling fear and obedience.’

You can check out more images below. Hopefully that’s enough to hold you over until the inevitable remake of Patriot Games. 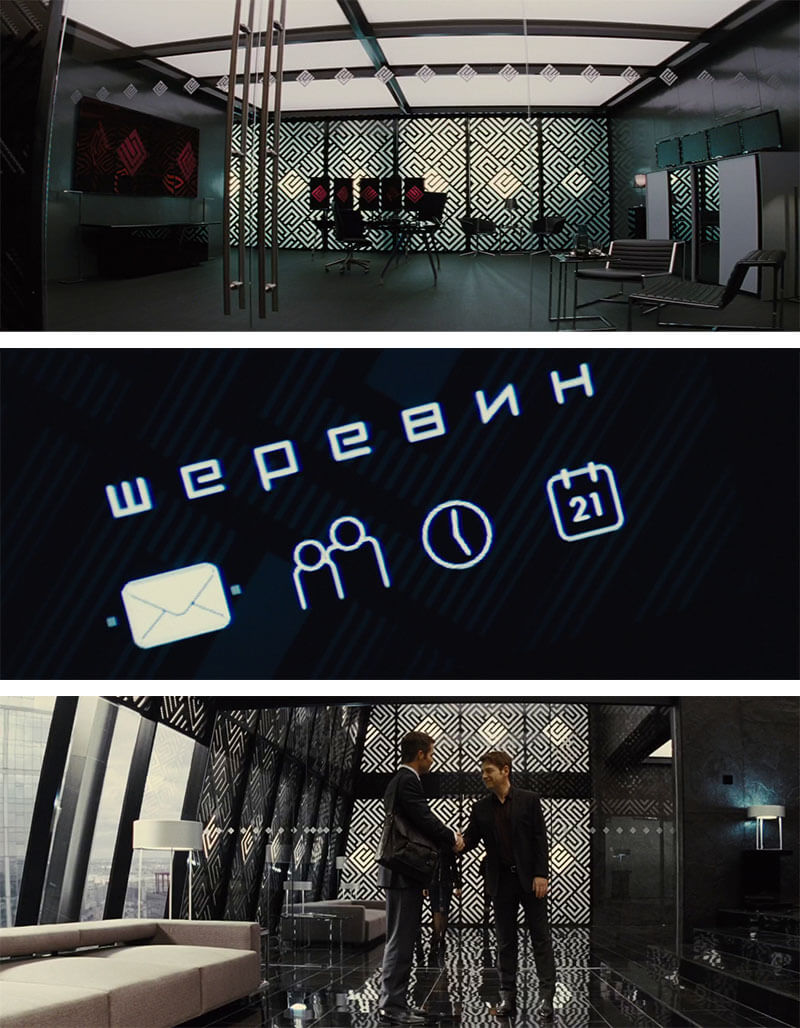 All images in this post are the intellectual property of Paramount Pictures/Skydance Productions and are published here in fair use.